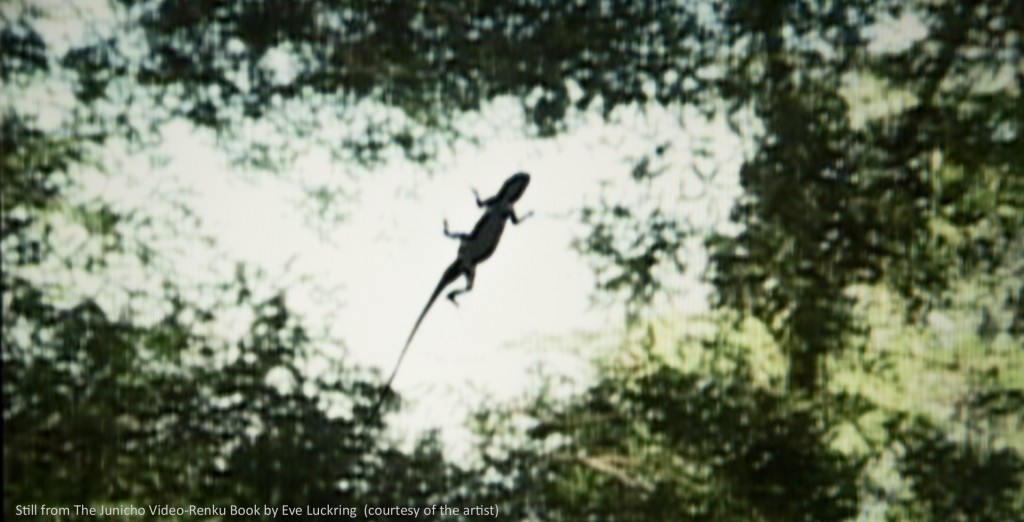 The Junicho Video-Renku Book is a series 12 “twelve-tone” video-poems (1:45- 3 minutes each) based on a form of 17th century Japanese poetry. The experience of watching a video-renku is phantasmagoric. From a centipede trapped in a sink to a man singing karaoke to his pet love-birds, The Junicho Video-Renku Book creates a richly layered collage of moving image, sound, and text that journeys through the everyday. Similar to an exquisite corpse, renku is composed as a counter-narrative according to a complex set of rules based on the structural devices of “link and shift”. I have invented video-renku as a framework to explore the “link” between the ephemeral and the concrete, and the perpetual “shift” in defining boundaries between the “natural” world and the culturally constructed. In this way, the work renegotiates the binaries of subject/object and self/world. In my adaption of renku to video, I’ve used the shortest and most flexible form, the Junicho, meaning “twelve tone”. In addition to many other parameters, the verses of a renku must travel through all four seasons, comment on love, and address both the moon and blossom.

Eve Luckring (US) began working with the moving image in 1990. Her work questions the assumptions, and experiments with the boundaries, that define place, body, and habit. She collaboratively produced a notorious L.A. underground nightclub for ten years, and since continues to create for places such as elevators, community rooms, and billboards, as well as for traditional exhibition and screening spaces. Her work manifests in video, poetry, and installation.