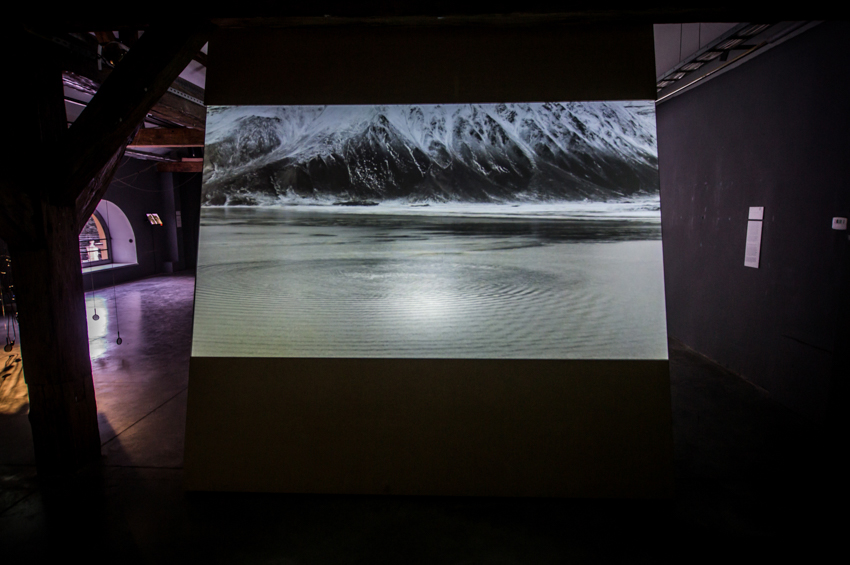 The work has been presented as part of the screening program no. 4, “Traces Left By Dream”.

A static shot shows part of a landscape, a serene body of water in front of a mountain. A motorboat enters the picture from the right, obeying the directions sent by radio and forming a spiral in the water’s surface. The boat then turns to the left and leaves the scene; solely its wake is visible for a time. Reign of Silence records a human intervention in nature. Lukas Marxt employs as aesthetic material and artistic medium an untouched, barren landscape that’s strangely surreal, where humans aren’t really expected. In this reduced setting he plays with the fascinating aspect of an autonomous nature, made visible by his aesthetic action; with the constantly changing relationship between humankind, environment and water; with processes of temporality and perception.

The conceptual reference to Land Art is obvious, and also to Robert Smithson’s iconic Spiral Jetty, which can be read ironically. But Reign of Silence represents more than a kind of filmic memory of a passing moment. The film not only documents something, it actually lays the filmic image over this landscape like a transparency, as a second artistic medium, indicating something beyond it and expanding the perspective. Marxt looks for a perceptual dimension that demands not only a reaction to nature as a spectacle, but also to the circumstances in which it was reproduced, and finds for this purpose a concentrated and playful form. Until it all ends as it began: with a view of serene, undisturbed water and in silence, with a form that finds its way back to itself, and which has transitioned to something different.

Lukas Marxt (AT), born 1983, studied geography, industrial design, art and media art in Graz, Linz, Lisbon, Leipzig and Cologne. Since 2007 his video works and installations have been presented internationally in several solo and group exhibitions, media art and film festivals in A. He is the recipient of several scholarships and awards, such as among other Medienkunstpreis Horb, Marler Videokunst-Preis, Diagonale Prize for Innovative Cinema, Lentos Art Award or the special mention of the Edith-Russ-Haus Award for Emerging Media Artists. He lives and works in Cologne, Leipzig and Graz.