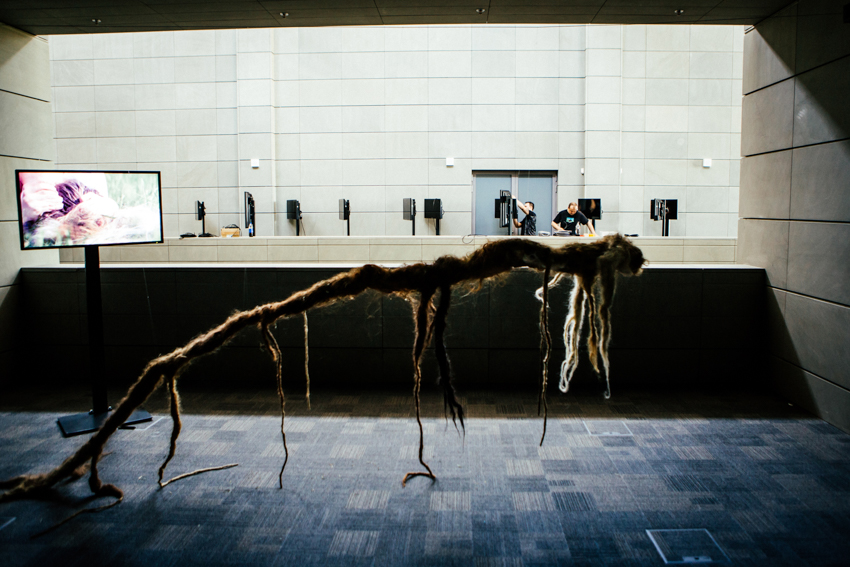 supervisor: prof. Grzegorz Klaman (with the cooperation of Anna Biała, PhD, Department of Genetics, University of Gdansk)
Intermedia Studio
Faculty of Sculpture and Intermedia
Academy of Fine Arts in Gdansk

The artist about the project:

“I revalued the ritual to the feminine and contemporary nature of a young adolescent women who faces the reality. I question the problem of youthful girls in the context of living space, origin, being in society, family and finding their place on Earth. The ritual of postriziny symbolizes here the departure from the secure area of the university and parental care into an adult life through a symbolic haircut.”

The project is a summary of the to date artist’s work.

Justyna Orłowska (PL), born 1988. She works with video, installation, bio art and performance. She is interested in both post-conceptual and the so-called engaged art. By remixing different media, she creates new contexts. In 2014, she won Grand Prix of “digital art now” competition at the International Festival of Digital Art Digital_ia 14 in Szczecin. In 2013, she received a scholarship from the Minister of Science and Higher Education for outstanding student achievement in the academic year 2013/2014, the Award of the Minister of Culture and National Heritage for outstanding student achievement of art schools and the Mayor of Gdansk Award in the field of culture for the best student of the Intermedia in the academic year 2012/13. From 2013, she has been the member of the art group atelieR of Gdansk / Warsaw. In 2014, a member of the film group ARTsight in Gdansk. She is currently studying Intermedia at the Faculty of Sculpture and Intermedia, Academy of Fine Arts in Gdansk.