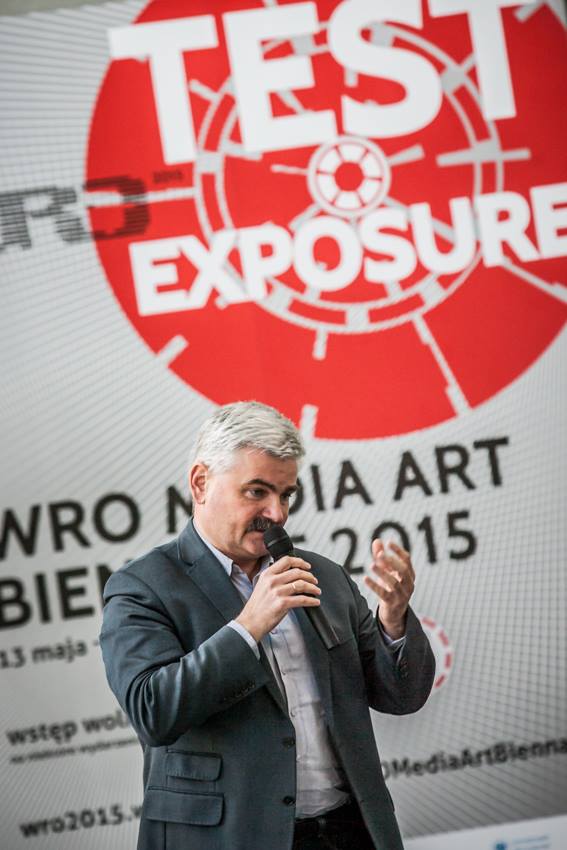 About the conference. The city: the human, the system, the interface, i.e. hacking of the social operating system

The symposium titled Hacking the social operating system organized as part of the 16th WRO Media Art Biennial will inaugurate a series of events dedicated to the city and its evolution in the coming decades.  By the next Biennial in 2017, and in particular in 2016 when Wrocław holds the title of the European Capital of Culture, we will be trying to imagine, discover and create the City of the Future.

“Pixelated Revolution” – the main part of this film is a short video footage taken with a smartphone by a Syrian insurgent who tracked snipers. Suddenly, we see the smartphone camera lens target a soldier. The man locks eyes with the lens for a second only to raise his rifle and shoot. The image disappears, all we hear is the sound of the falling body. Rabih Mroué, the author of “Pixelated Revolution” analyses here the logic of the duel in which pixels are drawn against bullets, and bits against atoms.  He fails, however, to bring out one aspect of the “pixelated revolution” that a group of middle school students drew my attention to during a meeting after the screening of a documentary “Chicago Girls”. The film talks about a Syrian teenager living in the US who, by means of the Internet and social media, coordinates the activities of a number of insurgent groups in Syria, assists them in publishing footage documenting the crimes of the regime and, finally, helps them organize material support. What surprised the Polish youngsters was that despite the shown devastation of Syria and its cities as a result of the civil war, where there is shortage of fairly everything – water, food, or medicines, there is one thing still in abundance, namely access to the telecommunication infrastructure. Revolutions, therefore, can be pixelated, because the network of digital communication is operational.

The revolutionary events of recent years, from the Arab Spring through the war in Syria to the Maidan, have in a spectacular way illustrated the change which the public space has been undergoing in recent years. Its most significant aspect is the collapse of the social structures, which had thus far organized the lives of groups and individuals. Though public mass institutions, such as political parties, trade unions, social organisations or churches still exist, they have an increasingly smaller influence on human decisions. It is in the individual that one must seek the sources of empowerment and subjectivity.

The only thing is that such an individualized subject is not a monad with no windows, an anti-social individual unable to coexist and cooperate. Armed with a smartphone or some other gadget providing access to the telecommunication infrastructure, such a person becomes a networked individualist. The concept was coined by the Canadian sociologist, Barry Wellman, for years involved in studying social and anthropological changes caused by the development of digital media. Networked individualists, though autonomous subjects, actively participate in different forms of collective public life. What makes them distinct is that they do so by coordinating their individual and social lives by means of access to information and constant communication with others also hooked to the Net.

The arrival of networked individualism is connected with a deep anthropological transformation which touches on all aspects of the public domain. Manuel Castells, a prominent scholar of the contemporary society, points to the changed meaning of such fundamental notions as time, space, and reality. The possibility of a constant communication mediated by digital means introduces a fourth dimension to the traditional 3-D arrangement – that of information. This revolution is similar to the one that physics underwent one hundred years ago, when it was concluded that elementary particles had to be described following a new understanding of time and space.

The effects of the changes taking place today is of paramount significance – networked individualists do not inhabit a space which is 3-D, but a hybrid multidimensional one. When we see the big city dwellers with their eyes glued to the screens of their smartphones, we see their bodies which can be located by means of traditional spatial coordinates. But where are the actual persons – owners of those bodies?

The resettlement of the networked individualists to the hybrid space is of great importance in experiencing the city. Traditionally, the city has been a special space, forcing strangers to be together despite their differences. The consequent interactions produced complex codes and forms of consensual coexistence in a common space. Networked individualists, however, can occupy the same physical space and actually not be together. They do not need to make the effort to find an understanding with a stranger as they can coordinate their daily lives enabling them to reside in their own social network as often as possible.

Such coordination is becoming increasingly effective as a result of the Social Operational System. Barry Wellman uses the notion to describe the invisible part of the social reality which is sometimes conventionally termed the Network. The social operational system is, obviously, composed of the technical infrastructure of contemporary digital communication. It is followed, however, by protocols controlling this infrastructure and, finally, interfaces and codes enabling access to it. Though it is invisible, the social operational system is an ever powerful and an ever complex “dark matter” of the modern world.

Many networked individualists are convinced that digital communication has given them the freedom and liberty of communication. This freedom and liberty are to a great extent limited, however, by the logic of how the social operational system functions. It is the interfaces of such platforms as Facebook or Google that have an increasingly greater impact on the access to information. The digital footprints a Network user leaves behind are now used in ever more sophisticated techniques of monitoring, surveillance and profiling. Marketing services of corporations are as eager to use them as the secret services of countries.

In a world of networked individualism and social operational system, utopia is fighting dystopia. Fans of the digital revolution emphasize the emancipatory potential of new media, arguing that the revolutions of today would not be possible without Facebook or Twitter. Critics, on the other hand, point to the fact that never in history did tyrants have more possibilities of keeping their citizens under surveillance. As is always the case, reality lies somewhere in between these two extreme stances. Manuel Castels observes that indeed the new communication platforms have triggered the development of hybrid reality and the phenomenon of a mass personalized communication. But the freedom thus obtained is limited as it is commoditized – we can only use it on the terms offered by the owners of these platforms. Revolution is possible provided it does not get in the way of the interests of Facebook or Twitter.

All of that is merely the beginning, however, as was the slogan of the last Digital Life Design DLD15. conference in Munich. Indeed, we are just beginning to comprehend the structural consequences of the anthropological shift mentioned above. Still, we are a long way from understanding the far fetching consequences of the world developing in new dimensions. How will it let us meet our many needs, from daily shopping to transportation, access to culture and participation in political life? How will the physical space of cities change in the process of becoming Real Time Cities, i.e. whose functions, including that of controlling the flows of people, are managed in real time?

We will start looking for answers to these questions on 15 May, during a symposium titled “Hacking the Social Operational System”. Together with the invited guests: artists, scholars and activists, we shall take a look inside these dimensions of the contemporary social space, which is not visible, but which has an increasing influence on our lives. We will clash the utopian mode of thinking, based on the belief in the emancipatory power of new technologies as promoted by Alain Renk, the French city planner and architect, against critical reflection, revealing our denial of things which are unbecoming, of which we are ashamed and which we would rather not know about. Such approach is visible, for example, in the works of Oliver Ressler, an artist from Austria, who reveals the darks sides of the practice of the capital.

The invisibility of the social operational system, however, involves an array of additional aspects. It is possible to show them with a little bit of good will and scholarly skills. That is what the Polish participants of the symposium will aim at: Bogna Świątkowska from the Bęc Zmiana Foundation of New Culture, Karol Piekarski from CityLab in Katowice, Maciej Frąckowiak from the Adam Mickiewicz University in Poznań, or performer Piotr Wyrzykowski.

On Saturday, 16 May, we welcome to workshops for a more interactive involvement in hacking the social operational system. That will only be the beginning, however, as our work will continue after the summer vacation during a series of seminars on the invisible aspects of life in the digital world.

Following this introduction in 2015, we will devote the following year when Wrocław becomes the European Capital of Culture for 2016, to the joint work of experts, artists, researchers and participants of the events organised on the occasion, with the aim to create a vision of the City of the Future. How will it change as a result of the social, demographic, environmental and technological changes? What will the city of the Anthropocene look like – a city of a new geological epoch, in which it is the human that has the decisive influence on the development of the global geo-ecosystem?

We are unable to foresee the future but, as William Gibson, one of the most prominent representatives of the literary genre of cyberpunk observed, the future is already today, only that it is unevenly distributed. And so we will look for its traces in our dreams, in the intuition of the artists, in the ideas of scientists and inventors. We being on Friday, 15 May, in the new building of the Library of the Wrocław University.

Edwin Bendyk (PL), curator of the symposium “Hacking the Social Operational System” and the “City of the Future” program during the year of European Capital of Culture Wrocław 2016. Writer, journalist, head of the science department at “Polityka” weekly, author of the City of the Future  Laboratory at Warsaw University.