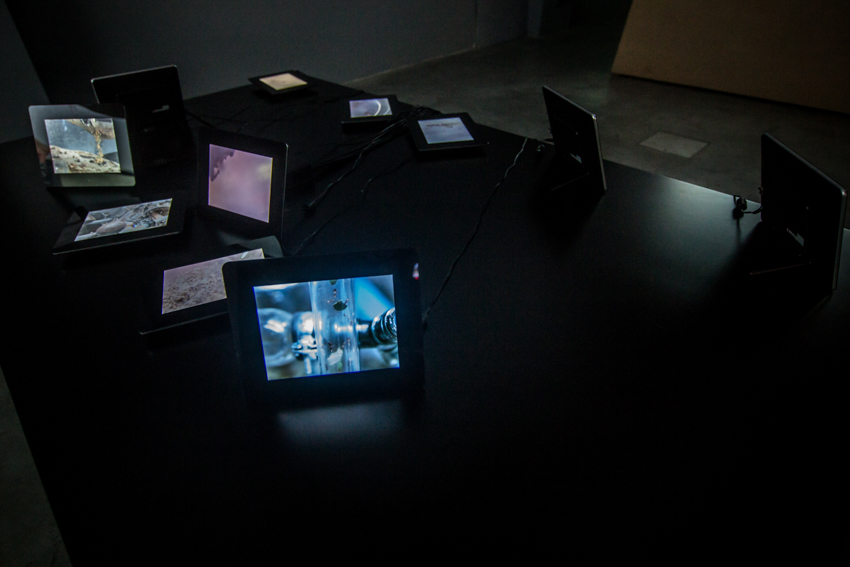 The installation has been presented within the Biennale WRO 2015 “Cultivating Cultures” exhibition at WRO Art Center. Currently it is shown in form of a video documentation on digital frames.

The Critics and Editors of Art Magazines Award

The project Symbiosity of Creation begun in 2012 and it is predicted to continue for at least twenty years until approximately 2034.

The idea behind the Symbiosity of Creation was to create a work that would not just be an artifact and an exhibit by its creator-demiurge, but above all a work that lives its own life, a work that participates, interacts, and is symbiotic with its author, who – in a conscious departure from his demiurge position – becomes an uncompromising part of the work. The lifetime of the work is not limited to the period of its exhibition, but its future is planned to allow it to function with complete integrity for many years and to provide it with collision-free mobility. It’s like creating a film that doesn’t end when its viewers leave the cinema.

Including in the project post-humanist discourse on the fall of the Nature-Culture dichotomy broadens its tone on a theoretical level, which dispels this dualism and lifts the classic divide between the artist and his creation. References to Latour’s “Actor-Network Theory” are not accidental convergences of the acronym ANT with ants, but the very clear use of this theory to liquidate divisions in this project and its multi-layered symbiosity, which is key to the project and of the utmost importance.

Paraphrasing Michel de Certeau, and further Michel Foucault, it’s obvious that my train of thought within the context of the Symbiosity of Creation only records the tracks of more or less certain steps into territory that has long been inhabited. Despite this, this project changes me and what I thought; I co-create in order to change, to change my thinking, and to no longer think like I did before. In this sense, my work not only changes my thinking, but also my perceptions of everything outside of the narcissistic, egotistical “I”. There are absolutely no compromises in what we create together, and each of us—the superorganisms and me—mean nothing on our own; we don’t exist without one another as a work of art. We have found the shared quotidian that we create together.

The sounds emitted by the ants, which are undetectable by the human ear, are amplified many times by very sensitive contact microphones. The ants’ noises are used daily for communicating information about the situation inside the glass installations in the incubators.

The project comprises four parts: 1. Reconstruction of Non-human Culture; 2. Kingdom of the Shared Quotidian; 3. Subterranean Struggle; 4. After Humans. The Biocorporation.

Elvin Flamingo aka Jarosław Czarnecki (PL), born in 1967. In 1987-1991, he was a student of the Faculty of Painting and Graphic Arts at the State Higher School of Fine Arts in Gdańsk (currently the Academy of Fine Arts). He received his Master of Fine Arts in 2004.

In 1999-2001, he was the founder and leader of the Onion Center Club, an absurdist movement and musical group that performed cacophonic jazz. In 1988-2011, he worked as a freelance commercial graphic designer. His artistic debut was in 2008 with the para-documentary film about musical improvisation entitled Small Spaces, which won a Golden REMI (2009) at the 42nd WorldFest-Houston International Film Festival (USA). The film was also nominated by TV Kino Polska for the award of Off Discovery of the Year.

Founder of the Un Gusto A Miel Art Foundation, which, in co-operation with the University of Gdańsk, organized the Between International Festival of Literature and Theatre in Sopot.

In 2011-2014, he was a doctoral student in the Transdisciplinary Workshop at the Faculty of Sculpture and Intermedia at the Academy of Fine Arts in Gdańsk. Since 2012, he has been lecturing at this faculty. The Symbiosity of Creation is his doctoral dissertation.

He lives and works in Sopot, Poland.