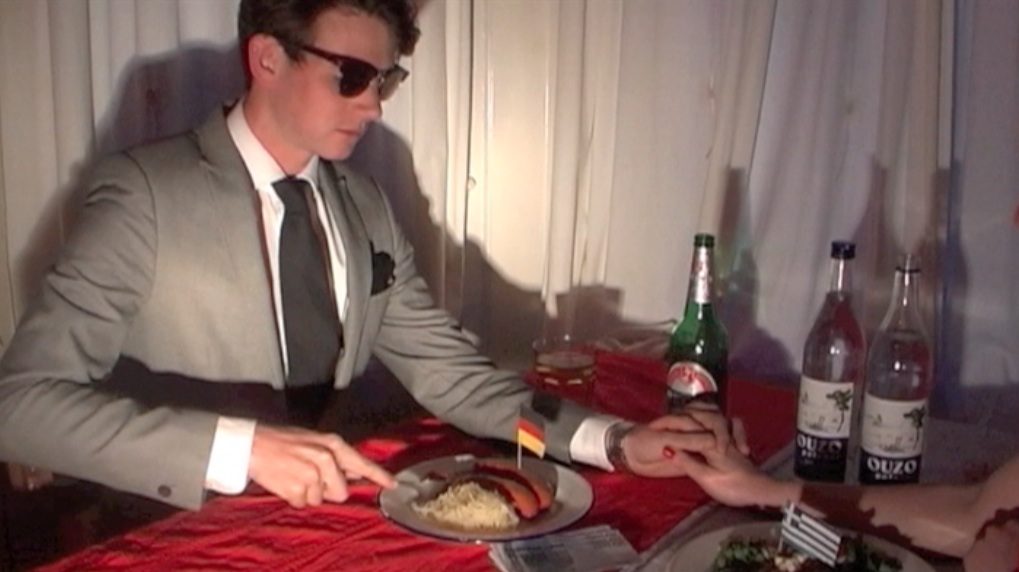 TAKE ME TO THE GREEK

The work observes the ever-fractious relationship between the countries of the European recession 2007/08. Comparing the relationship between countries of increasing economic success and growth to that of countries that have been found out to be in an enormous situation of debt. It creates a fictitious realm in which we simply and crassly discuss the extreme stereotypical cultural and social opinions of Greece and Germany in particular. Theses extreme generalizations are expressed in the personification of these countries as individuals. In a narrative that sheds light on their frustrations and expectations of each other, demonstrated in the guise of a highly implausible love affair.  Using these stereotypes as playing cards in an absurd game of economic power and debt –who has been resentfully rescued or bailed out by whom? The work aims to be a critique of the farcical reality that is the global economic crisis. Our fundamental aim is to highlight the idiosyncratic nature of the system itself.

Before winning the Turner Prize in 2015, the artistic duo Maryniak & Mclean graduated with first class degrees from Bath Spa University on the merit of their performance based practice. Their work inexhaustibly interrogates what it is to be a living, practicing artist today. With such prestigious talent the pair were on their way to Art World superstardom. It’s no wonder therefore that their premature deaths sparked controversy and suspicion, with the YBA’s of the 90’s reported to be the main suspects, remaining still at the forefront of an ongoing media scandal. Maryniak & Mclean’s last public words were reputed to have been: “Tracy Emin is old enough to be our mother.”