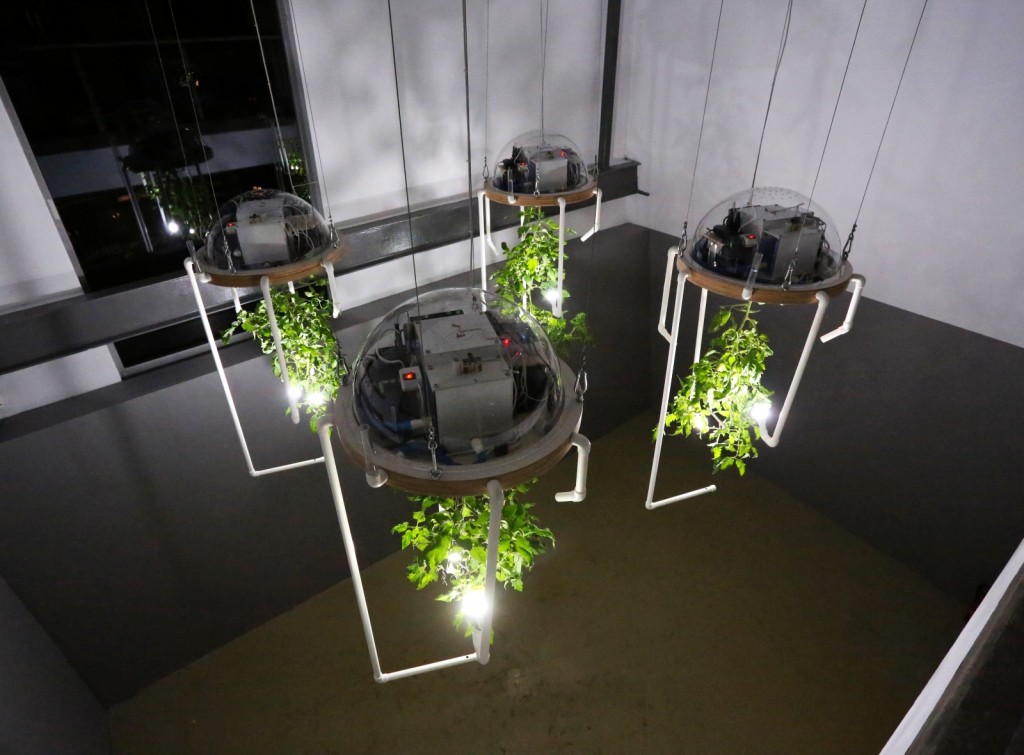 A generative musical composition whose score is written by the plant growth.

Taking everyday care of the plant light vegetation cycle, its watering, the temperature and humidity of the air has an impact on the habitat, whose values are systematically measured by the sensors placed inside each of the plant.

The time signature of the composition reads sixteen-four for every stand and is based on the sound of a guitar (overdrive and clean sound), a concert zither and a piano. Its musical character is the result of the previously prepared rhythmic structure control and scale of the instruments by reading the sensors.

And so for each of the instruments:
– the amount of water affects choosing of the rhythmical structure: the higher the reading, the more intense structure,
– if the air temperature falls below or rises up 24°C, the current rhythmical structure becomes flat or accentuated,
– the humidity of the air is responsible for the intensity of the sound vibration,
– the soil moisture equals span of the sound scale,
– the vegetation light cycle turns on the music generativity for each stand.

In addition to this, everything we do to take care of the plant has its own individual sound character, based on the operating parameters, such as watering of the plant or the humidity of air.

Keeping an optimal environmental conditions is crucial for the proper plant growth; however, there is no physical correlation between the plant growth and the soundscape in which they are set.

The composition, however, has a positive influence on the plant, for the tomatoes become objects of a deep observation and care of their attendants.

Maciej Markowski (PL), born 1976, a musician and a programmer. He studied mathematics at the University of Wrocław and completed the second degree music school in Wrocław. He co-founded the band Small Instruments, with which he recorded an LP album Antonisz and made ​​many musical projects, including the award-winning Toucan OFF statuette of the 29th Review of Stage Songs in Wrocław for the performance Power of Sound. He plays in the band Kariera, with which he recorded two albums: The City and Lullabies, together with four other amateur musicians, he is part of the ironic-experimental pseudo-sea shanties band Shantharion. He produces videoclips, and designs and programs multimedia installations. He has worked with Wrocław Contemporary Museum (Wrocław, Poland), WRO Art Center (Wrocław, Poland), the Capitol Musical Theatre (Wrocław, Poland), Centre for Contemporary Art Ujazdowski Castle (Warsaw, Poland).