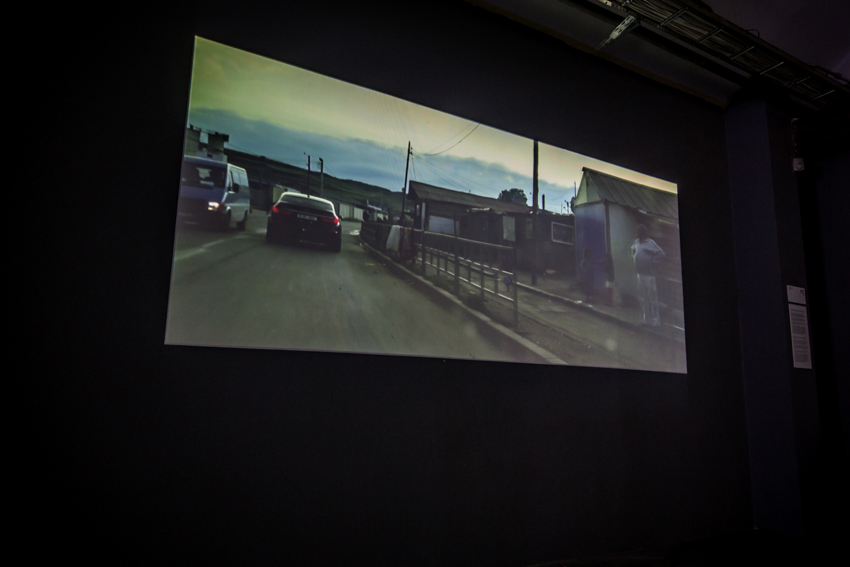 Drive by is a structural film consisting of multiple shots taken when driving through a Romani neighborhood on the outskirts of the city Cluj-Napoca in Romania.

Filmed in slow motion (60 fps), the act of passing through the space literally stretches a fleeting instant into a prolonged pan, exposing the power of decisive moments and revealing – from what may seem to be a superficial and a momentary glance – ethical questions about the nature of the encounter.

This visual treatment is used as a metaphor to address the problem of representing the phenomenon of poverty and its characteristic feature: its simultaneously intense visual presence and invisibility. This intensive visual, almost pictorial, presence can be understood through the words of the Romanian artist Dan Perjovschi, which defines the term as “a vivid contrasts, creating conflicting and brutally picturesque visual contents”.

This specific type of pictorialism is inherently present in all other centers of poverty within the modern world: the favelas of South America, or the slums of the Asian megalopolises, and suggest a process of visual-transformation of the presence of poverty within the growing economies of the developing world.

The soundtrack of the film maps the sonic universe of Romanian radio stations interspersed with historical recordings from the Revolution of 1989 and recordings gathered during filming in Romania in 2014. This soundscape becomes a contrasting background to the fate of people whose status-quo seems to remain indifferent to the courses of history.

Lena Dobrowolska (PL), received an MA diploma in Intermedia Art from Art Academy in Cracow (2014) and BA (Hons.) diploma in Photography from the University College Falmouth (2010).

Working with photography and artist film, her works often explore through the use of structure and metaphor, the ethics of representation of what at first may seem a documentary subject matter.

She is the recipient of multiple international art scholarships and grants that have enabled her to work in the United Kingdom, Romania, Germany and Lithuania. Her solo exhibitions include: Plateau (2012) and Time of the glacier (2014). Her work has been shown internationally, recent exhibitions include: Malopolski Ogród Sztuki (Poland), Stills Gallery Scottish Center for Photography (UK), Maison de la Photographie (France), Galerie Huit (France), Culture Communication Center (Lithuania).