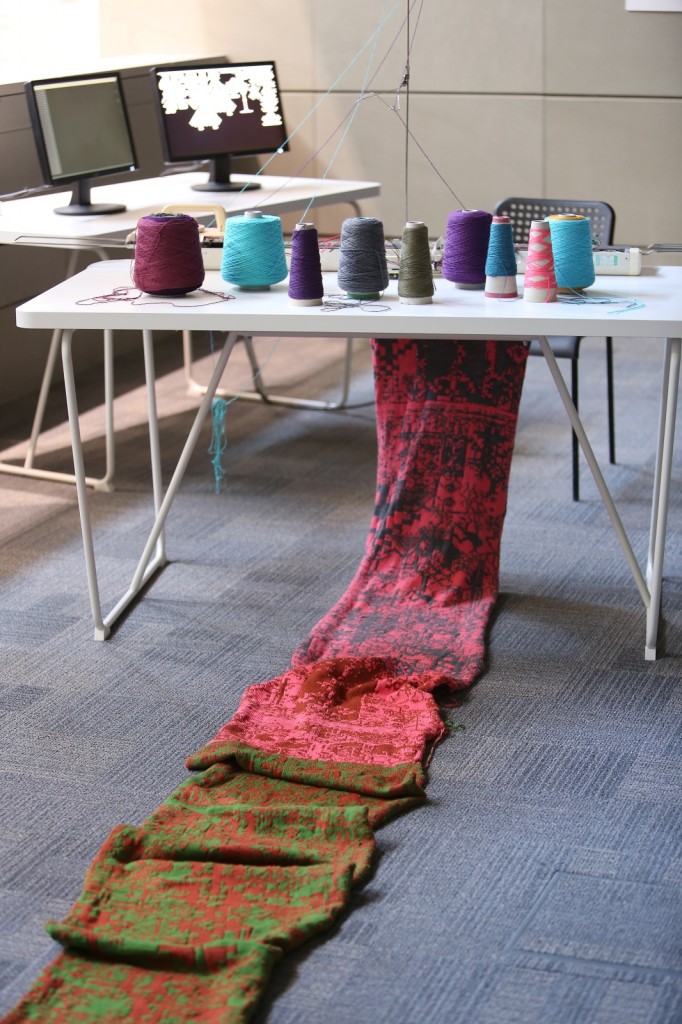 Oiko-nomic Threads is an interactive system commenting on the notion of work through the production of a knitted textile. By redefining the functionality of an obsolete knitting machine and rendering it part of a new system, the creation of a generative textile is made possible. Its decoration emerges from the data visualization of the Manpower Employment Offices databases, using selected patterns originally from Greek folk art. The system is presented through an interactive installation that refers to the production methodology and creates conditions in which the knitting process remains accessible and contemporary. Thus, the knitted textile as a product becomes an active record of archival resources.

Afroditi Psarra (GR), a multidisciplinary artist and a researcher working with e-textiles, electronics and sound. Her interest focuses on concepts such as the body as an interface, contemporary handicrafts and folk tradition, pop iconography and retrofuturistic aesthetics. Her work has been presented at numerous platforms like Siggraph, Ars Electronica, Transmediale and CTM, Amber, Piksel and MakerFaire Rome between others.

Maria Varela (GR) works as a new media artist and designing workshops seeking to develop strategies of collective production. In 2010 she completed her MA studies in Interactive Media at Goldsmiths College, London. Through new media and creative technologies, she aims to trigger the viewers and convert them into active participants calling on them to transform her pieces according to their own personality. She is currently exploring themes of identity, memory, narrative and media archaeology.

Marinos Koutsomichalis (GR) is an artist and researcher. Via sound and a wide range of other media he interrogates the specifics of perception, technology and material and by means of a hypermedia, project based and site-responsive methodology. His work has been presented in all sorts of milieus ranging from leading museums and acclaimed art festivals to industrial sites and from underground venues to churches or scientific conferences.