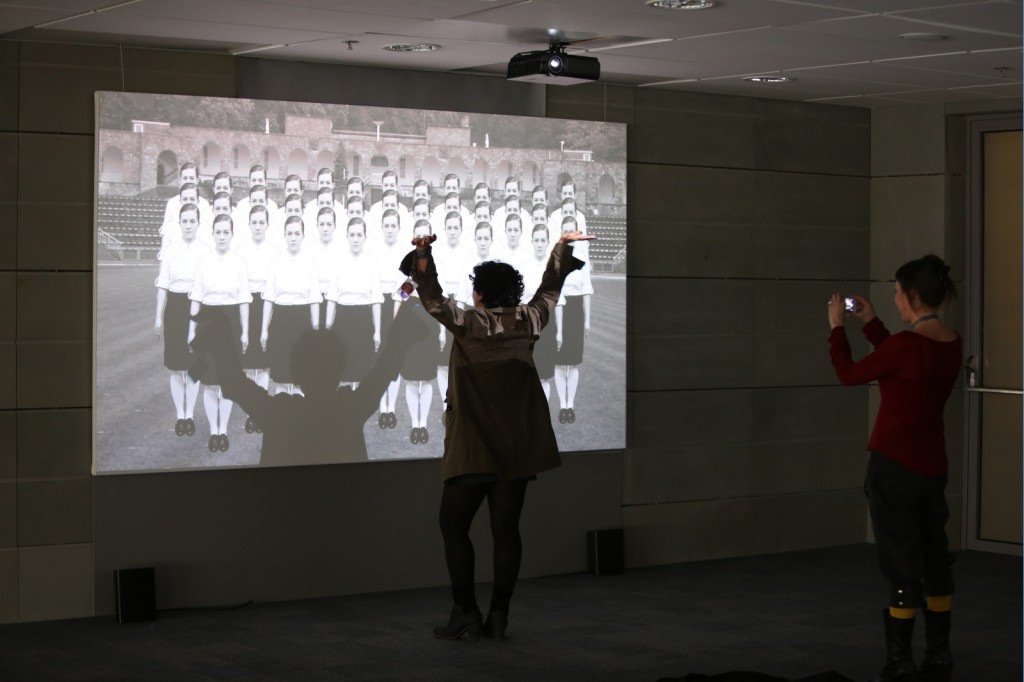 The work is about the relationship between the individual and the collectivity. It has been inspired by the Greek choir: its collectivity, array, standardization of individuals, ceremonial character and universal remittance. The central element of the Greek performance has become almost excluded from the modern Theatre Science; in Mielcarek’s work, the choir becomes visible and personal – the artist decides to shift the generally accepted order by making the title “inversion”.

The genesis of the project is the artist’s inner conflict between the desire to belong to the mass or to be an individual, independent person.

Very important in the context of the work is the method of the “movement choir” by Rudolf Laban, which consists of a simple unison movement, which is the same for all the dancers. Unison choirs have been forgotten in Europe mainly due to Nazism: this movement was used in Hitler’s image campaign.

The place of action is the stadium of the Słubice Sports and Recreation Centre – until 1945 known as Ostmarkstadion – one of the oldest stadiums in Central Europe, formerly belonging to the right bank district of Frankfurt on the Oder. Historically speaking, the place was marked by Adolf Hitler who gave the speech there in 1932. Olympic gymnastics and field masses were held then there regularly. Additional value of this place is a strange mix of geometric shapes of the sport facility based on the architecture of the amphitheater in Aachen. Especially characteristic of this place is the crown of the stadium, which is a semicircular wall with the arcades of rough blocks of natural stone.

Choreography in the first video is based on behaviour of a policeman, priest, conductor, stewardess. The second arrangement is based on the mass behavior. Both projections are in dialogue with each other.

Marta Mielcarek (PL), born 1990, a graduate of the Faculty of Media Art of the Academy of Fine Arts in Warsaw. She works with photography and video.

She is a scholarship holder of the Ministry of Culture and National Heritage of the Republic of Poland (2013), and of the Fund for the Promotion of Creativity of the Polish Society of Authors and Composers (2012, 2013). In 2014, she received the Rector Award in the Exhibition of the Best Diplomas of the Academies of Fine Arts in Poland. In the same year, she also received the First Award of Coming Out: The Best Diplomas of the Academy of Fine Arts in Warsaw 2014.

She lives and works in Warsaw.