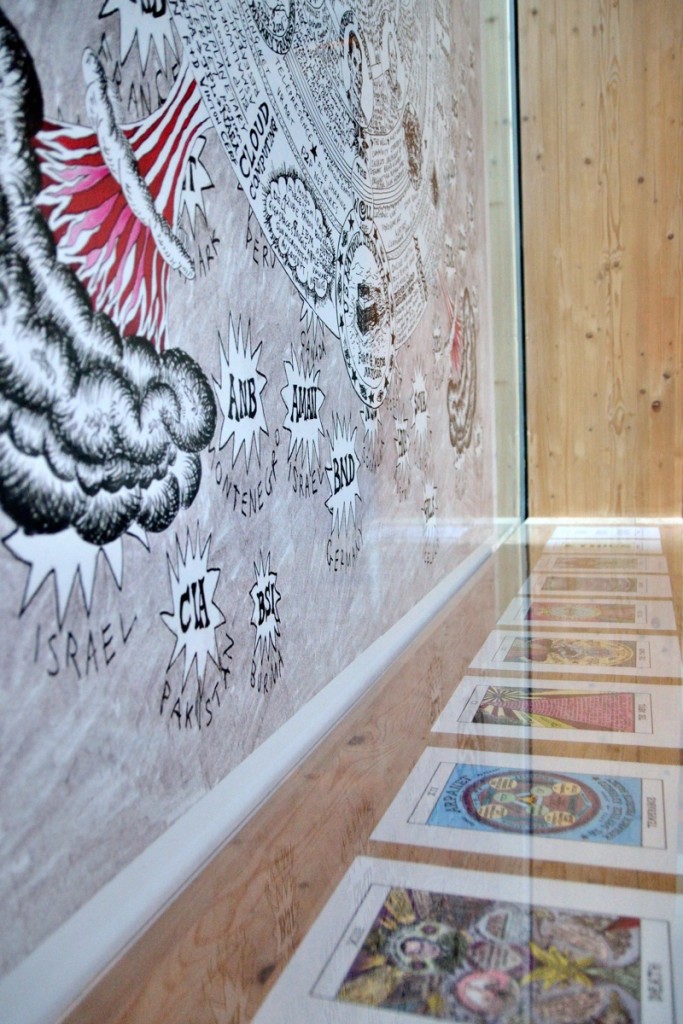 Hexen 2.0 – a complex, large-scale installation, consisting of drawings, prints, charts and maps presented in an original and suggestive form offers closer look at the development of modern communication techniques, treating the subject of birth and development of the “project modernity” – political and social achievements and constraints of civilization – as a series of questions about the impact of new systems of social manipulation and public control through interactive technologies.

Hexen 2.0 looks into histories of scientific research behind government programs of mass control, investigating parallel histories of countercultural and grass roots movements. Hexen 2.0 charts, within a framework of post-WWII U.S. governmental and military imperatives, the coming together of diverse scientific and social sciences through the development of cybernetics, the history of the internet, the rise of Web 2.0 and increased intelligence gathering, and the implications for the future of new systems of societal manipulation towards a control society.

Hexen 2.0 specifically investigates the participants of the seminal Macy Conferences (1946-1953), whose primary goal was to set the foundations for a general science of the workings of the human mind. The project simultaneously looks at diverse philosophical, literary and political responses to advances in technology including the claims of Anarcho-Primitivism and Post Leftism, Theodore Kaczynski/The Unabomber, Technogaianism and Transhumanism, and traces precursory ideas such as those of Thoreau, Warren, Heidegger and Adorno in relation to visions of utopic and dystopic futures from science-fiction literature and film.

Based on actual events, people, histories and scientific projections of the future, and consisting of alchemical diagrams, a Tarot deck, photo-text works, a video and a website, Hexen 2.0 offers a space where one may use the works as a tool to envision possible alternative futures.

Suzanne Treister (UK), born 1958, studied at St Martin’s School of Art, London (1978-1981) and Chelsea College of Art and Design, London (1981-1982), a pioneer in the digital/new media/web based field from the beginning of the 1990s, making work about emerging technologies, developing fictional worlds and international collaborative organisations. Utilising various media, including video, the internet, interactive technologies, photography, drawing and watercolour, Treister has evolved a large body of work which engages with eccentric narratives and unconventional bodies of research to reveal structures that bind power, identity and knowledge.