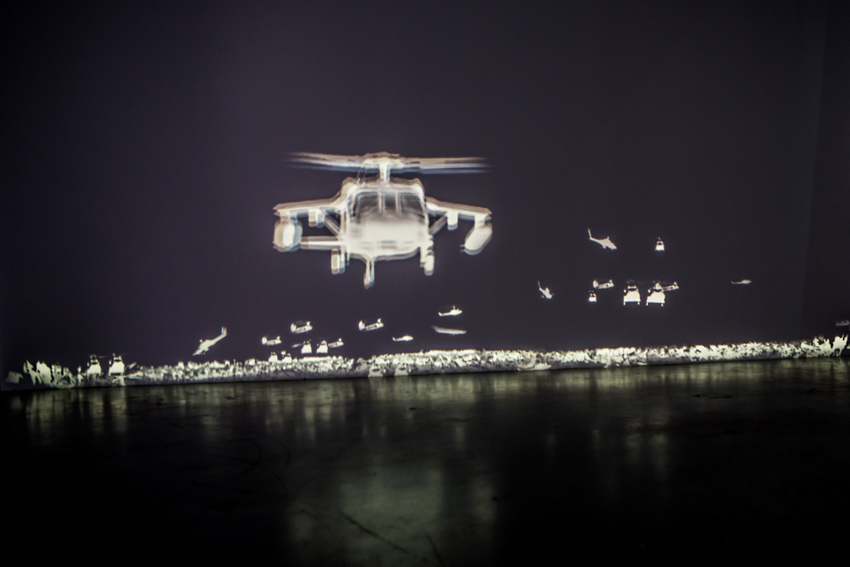 LEAK IN THE FLOOR

Moving of the installation from the exhibition in the University Library.

An above-the-floor projection. A video fresco composed of dozens of short video clips – footage loops found in the current news services, unified by means of the negative in one luminous horizon on the verge of abstraction. The scale of the real events, reduced to a toy size, infantilizes horror, making one to reflect on the prospect of allowing the perception of the whole ongoing contemporary drama of war and killing, more than receiving another repeating detail in the media. The scale of the floating above real Apache helicopters, resembling harmless toys, changes rapidly at times, confronting us 1:1 with them.

The way the information is conveyed defines the way in which we perceive the world conflicts. The modern slaughter is determined by the perspective in which we see current events in Iraq, Syria or Afghanistan. We are facing the war of perspectives, war of ways of representing death: whether in its medieval theatricality in the style of Big Brother, in perverse productions of executions by ISIS, or in “anesthesia” pictures from sights of the Apache helicopters.

We do not lack access to information, but we paradoxically lack forms of its objective staging: a suitable perspective of receiving the whole – rather than fragmentary, disconnected small parts, provided by the media. The (ob)scene of the image, relevant to our times, is about equalizing the notion of the scene that builds the ethical relationship between the viewer and the event.