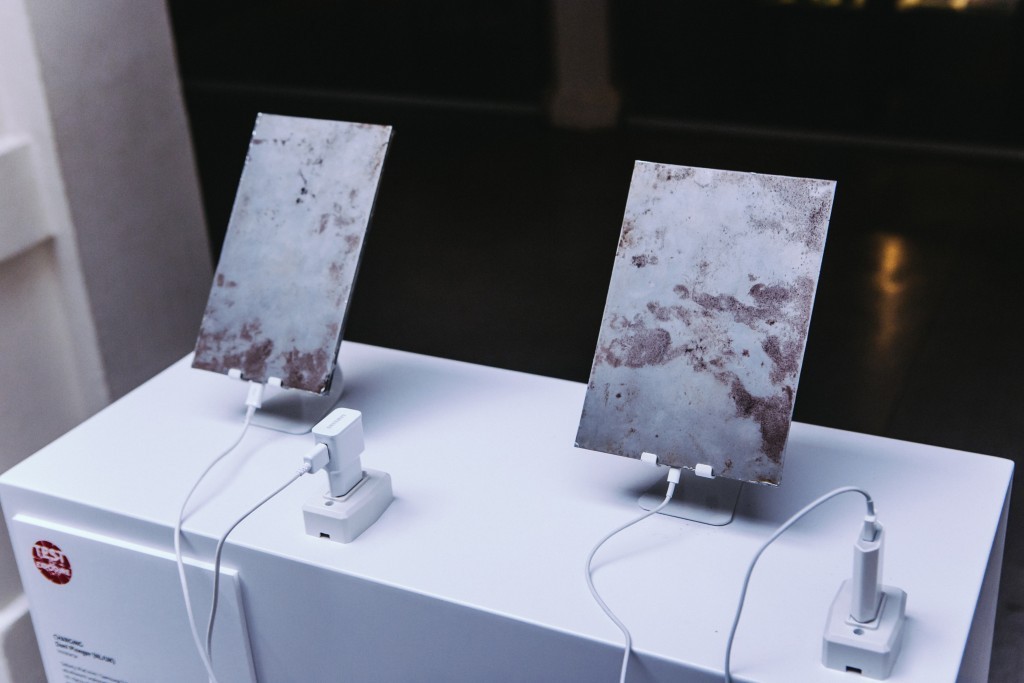 Moving of the installation from the Biennale WRO 2015 exhibition in the National Museum.

An Apple iPad mini and a Samsung Tab3 have been encased in sheet metal. Only the charging connectors remain accessible. The devices are charging endlessly. Visitors may handle the devices. Since the 1930s, goods from cars to light bulbs have been produced following the logic of planned obsolescence, designed to break after a certain time, and thus forcing consumers to buy replacements. For tablet computers and similar contemporary devices the replacement rate is even faster, and with the difference that we usually get rid of them before they show signs of material decay, only because we can’t update the software, or because a new model is available. We no longer perceive these devices as material objects, rather just as a gateway to information. Two things happen when such objects are wrapped in metal: first, the tablets, while still recognisable as such and functioning ľ as they keep charging, become useless. This way, they revert to the status of material objects from that of merely channels for information. Secondly, the slick design of the mass-produced tablets makes them virtually all identical in their streamlined manufacture.

Dani Ploeger (NL/GB), artist and theorist. He holds a PhD from the University of Sussex, UK, and is currently Senior Lecturer and Course Leader Performance Arts at The Royal Central School of Speech and Drama, University of London. He is also Principal Investigator of an AHRC-funded arts-science project on digital performance and the politics of electronic waste.