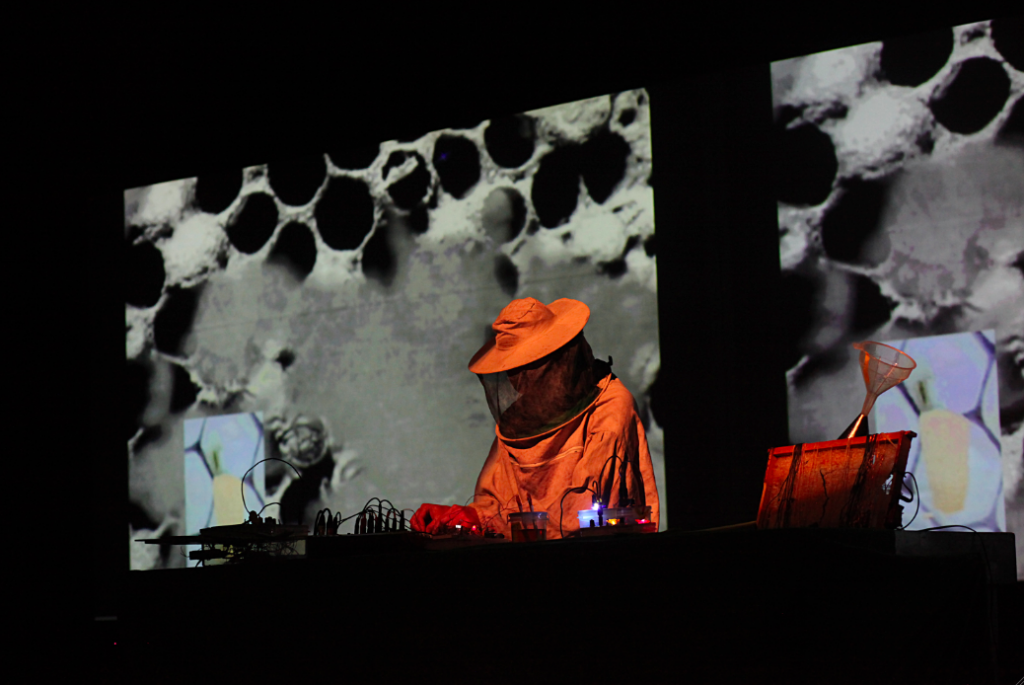 The Hive Synthsis idea is to create an audio journey which explores the sounds and frequencies inside the honey bee’s home – the beehive.

In each honey bee colony there are three types of bee. The drone, worker and queen bees, each of these have their own individual frequencies in the ranges of; low – 200 Hz or less, mid – 200-400 Hz and high – 400+ Hz, just like the earth has its own special frequency of approximately 9 Hz.

As a electronic music producer and seasonal beekeeper, the artist was inspired to learn more about bee frequencies and make a creative work that incorporated these bee frequencies in the hope of raising awareness about bees and their increasingly fragile ecology system.

Bioni Samp (UK), an artist, producer and video maker. He graduated in Audio-Visual Studies (Film, TV, Animation, Sound Design) from Surrey Institute of Art & Design, University College, England, and in Electronic Imaging and Sound from Duncan of Jordanstone College of Art and Design, Dundee University, Scotland. He creates experimental electronic music, live and on recordings. He also seasonally works with bees. When not bee-keeping, he makes custom audio software and hardware, which he uses in creating his music. Bioni Samp has been publishing his work since 1995 and has had releases on various labels: Aconito Records (UK), EMIT (UK), Harthouse (DE), Philtre/Kompakt (USA), Instinct (USA), Minimalizm (USA), RoHS Prod (FR) i Noise Music (BR). He lives and works in London.