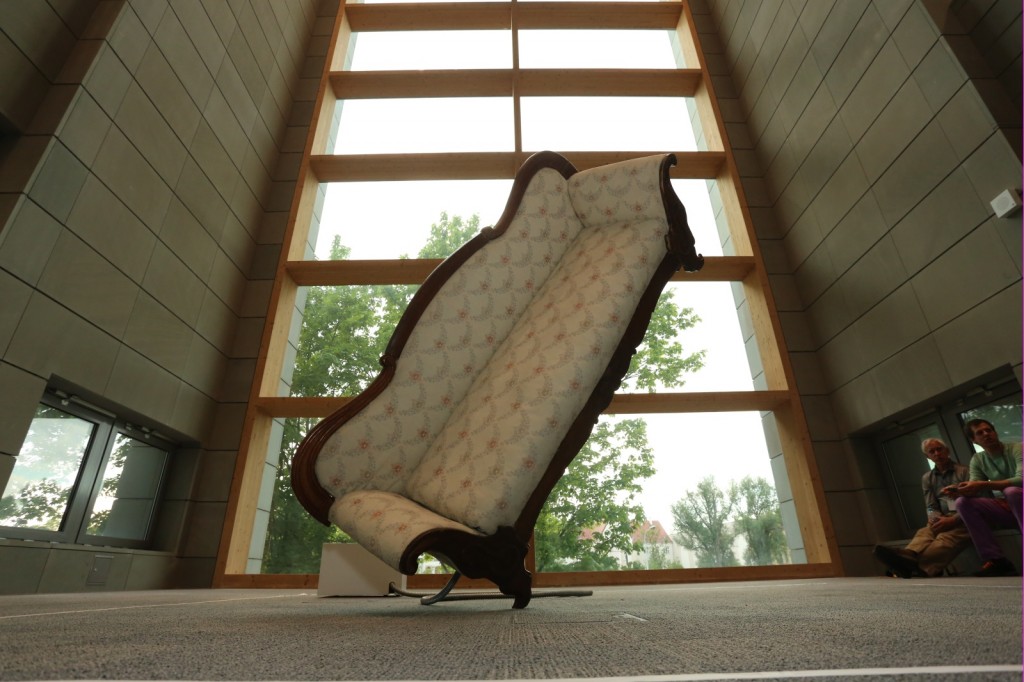 Balance is delicate, and sometimes we fall down. A 170 year old sofa balances precariously on one leg, continuously teetering, responding internally to external forces.

The project had two unique technical and artistic goals: it creates a kinetic metaphor for the inherent risk in social relations and tests whether an object could actually be balanced perpetually on a fixed point.

The internal mechanism of the sculpture is based on a concept known as a reaction wheel, a technology most often deployed in satellites to correct spatial orientation. Rather than shift its center of mass in reaction to falling, or employ gyroscopic forces, freely spinning motors apply torque to the frame of the sofa, causing it in turn to attempt to rotate in the opposite direction, effecting a weight shift about its foot on the ground.

Jacob Tonski (US), born 1977, holds an MFA from the Design | Media Arts department at UCLA. He studied computer science at Brown University and worked as a Technical Director at Pixar Animation Studios. He has spoken at the Haystack Mountain School of Craft and The School for Poetic Computation. Recipient of an Ars Electronica 2014 Award of Distinction, he was awarded a 2013 Sustainable Arts Foundation grant and was a 2010 fellow at the Carnegie Mellon University Studio for Creative Inquiry.

He is currently teaching at the faculty of the Art and Technology Studies Department at the School of the Art Institute of Chicago. His creative work has been exhibited in China, in Brazil, and throughout Europe and the United States.