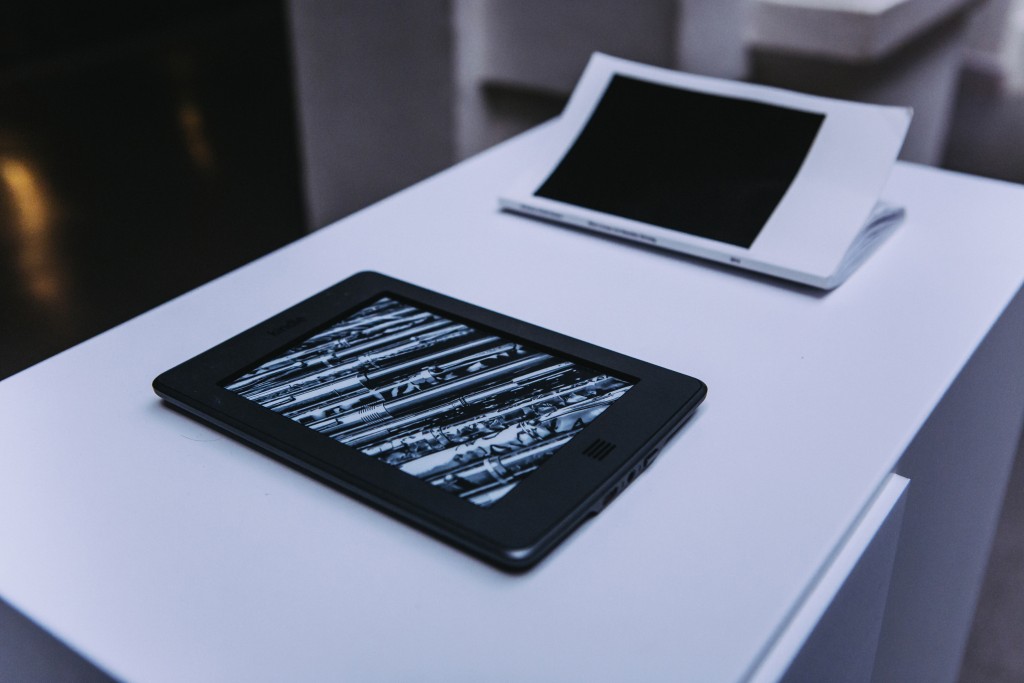 A print-on-demand paperback that consists of found photos depicting broken Kindle screens. The Kindle is Amazon’s e-reading device which is by default connected to the company’s book store. The book takes as its starting point the peculiar aesthetic of broken E Ink displays and serves as an examination into the reading device’s materiality. As the screens break, they become collages composed of different pages, cover illustrations and interface elements.

Sebastian Schmieg (DE), born 1983, studied new media under Olia Lialina at Merz Akademie in Stuttgart, at the Berliner Universität der Künste in Advanced New Media Studio run by Joachim Sauter and Siegfried Zielinski, he is also a graduate of Networked Media at the Piet Zwart Institut in Rotterdam. He lives and workes in Berlin and Stuttgart, where he teaches new media art. He works with found objects and materials and custom software to create pieces that examine the way contemporary technologies shape our online and offline realities. His works have been presented at major international festivals, such as transmediale (Berlin), PixelAche (Helsinki), Stuttgarter Filmwinter (Stuttgart) and FILE (Sao Paulo) as well as exhibitied in such venues as Bitforms Gallery or Museum of the Moving Image (New York). In 2014, he was a resident at the WRO Art Center within Goethe@WRO program.

Silvio Lorusso (IT), artist, designer, and researcher. His ongoing PhD research in Design Sciences at Iuav University of Venice is focused on experimental publishing informed by digital technology. He regularly collaborates with the Institute of Network Cultures in Amsterdam. After receiving his MA in Visual and Multimedia Communications in 2011, he spent a period of study at the Networked Media course of the Piet Zwart Institute in Rotterdam. From 2012 to 2014, he was a member of the Digital Publishing Toolkit Consortium. He took part in exhibitions and events such as Transmediale (Berlin, Germany), Impakt (Utrecht, Netherlands), Off the Press (Rotterdam, Netherlands), Fahrenheit39 (Ravenna, Italy). His writing has appeared in Metropolis M, Progetto Grafico, and Doppiozero. His work has been written about on the Guardian, the Financial Times, and Wired. Since 2013, he manages the Post-Digital Publishing Archive (p-dpa.net).