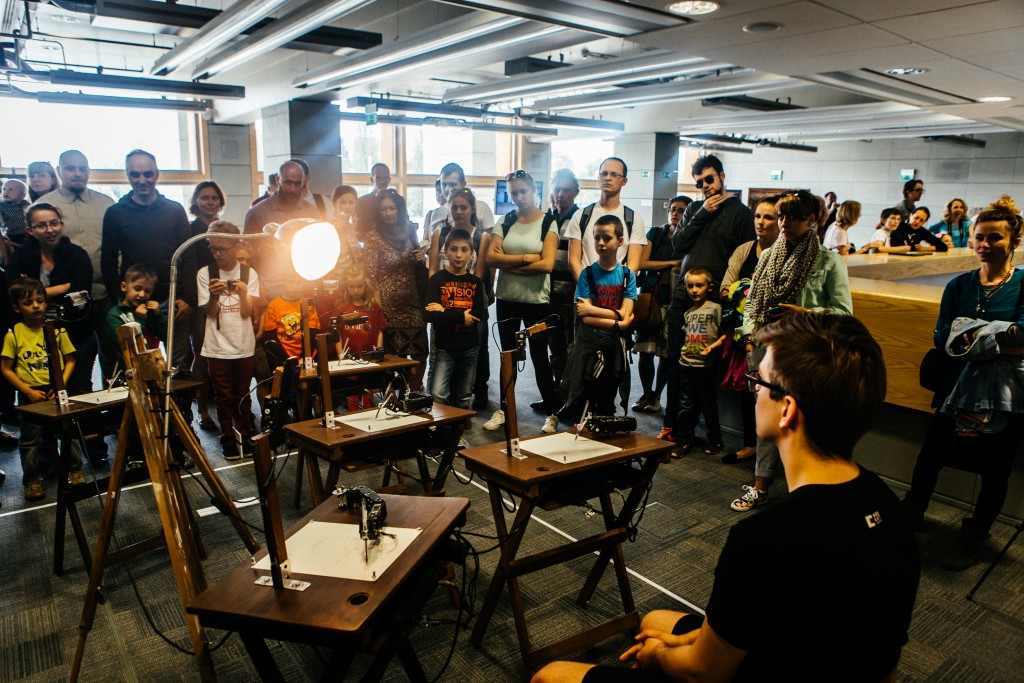 In a scene reminiscent of a life drawing class, 5 Robots Named Paul await the human sitter. When the subject arrives he is invited to sit in an armchair, an assistant pins sheets of paper onto the robots and wakes each one up. Immediately the robots look at the sitter and start to draw, their gazes alternating between the drawing in progress and the posing human. As the model in a life drawing class, the sitter is an object of study. Immobile, yet active in keeping the pose, the human is there to inspire the machines. For the audience he is only one of the 6 silent actors of a short theatrical event. The sounds produced by the robot’s motors create an improvised soundtrack. The robots, stylised minimal obsessive artists, are only capable of drawing. Each look alike except for their eyes, either obsolete digital cameras, or webcams. Their bodies are old school desks on which the drawing paper is pinned. Their left arms, bolted on the desks and holding black biros, are only able to draw. During the exhibition day after day the drawings progressively cover the gallery’s walls. Paul’s behaviours are based on research into the cognitive, perceptual and motor processes involved when artists draw from life, and also by the author’s drawing practice. The software driving Paul written, by Tresset is implemented using research from robotics, computer vision and computational creativity. Even if the way Paul draws is based on Tresset’s own technique, its style is not a pastiche but rather an interpretation influenced by the robot’s characteristics.

The 5 Robots Named Paul installation was first exhibited in 2012 at the Merge Festival, sponsored by Tate Modern, in London and then among other at Ars Electronica Festival (2014) and UPDATE 5 in Ghent, Belgium (2014).

Patrick Tresset (FR/UK) is a French artist and scientist who investigates human artistic activity, computational creativity and our relation to machines, in particular our relations with robotic entities. His robots are based on advanced technologies using research findings from robotics, computer vision, artificial intelligence and cognitive computing.

Following a degree in Business Computing, he migrated to London to become a painter. Between 1991 and 2003 his work was exhibited in solo and group shows in London and Paris. In 2003, Patrick lost his ability to paint and draw, he has since been working on computational and robotic systems that are able to simulate these artistic activities. Patrick’s research led him to join Goldsmiths, University of London, to study for a Master of Sciences in Arts Computing and until 2013, he codirected the AIkonII project with Prof. Frederic Fol Leymarie. The AIkonII project investigated the observational sketching activity through computational modeling and robotics. Tresset also created the creative robotics course taught to postgraduate students at Goldsmiths as part of the MFA Computational Arts programme. He is a Senior fellow at the Zukunftskolleg, University of Konstanz in Germany and is a currently a visiting research fellow at Goldsmiths University of London, United Kingdom. As a researcher, he has published academic papers in the fields of artificial intelligence, computational aesthetics, computational creativity, social robotics, drawing research, digital arts and computer graphics.